Posted on September 5, 2018 by Steve McKelvie

When I was at the recent Lime Rock Historic Festival, Bob Melhado, who was the Chief Steward, said to me: “Let’s take a look at a Philson Falcon.”  I agreed as I had never heard of Philson Falcon.  Bob said that this car has had a long racing career and looks the part. 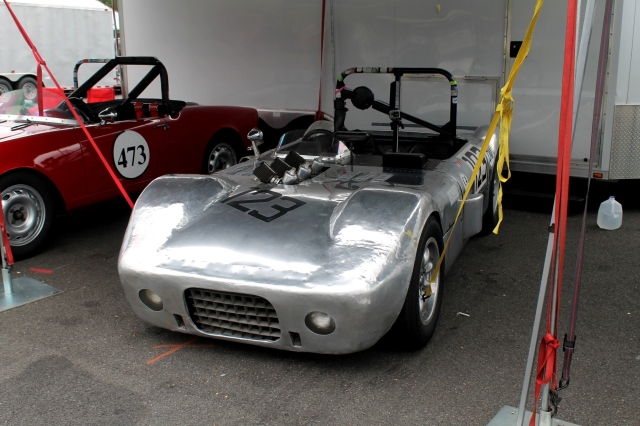 The car was much different from what I expected.  I was expecting something that looked like a or that was based on a Ford Falcon car, but the Philson Falcon is a unique car, unlike any Ford Falcon ever built.  It was custom-built by machinist and USAC technical inspector Norbert Philson in the 1957 – 1959 time frame.

The Philson Falcon has a tubular ladder frame of Philson’s own design, the front suspension from a TR3, and the rear suspension from a MG.  The result is a 1,500 pound car with a 88-inch wheelbase, a 139-inch overall length, and a height of 29 inches.

The Philson Falcon is powered by a considerably reworked Ford Falcon six-cylinder engine fed by three SU carburetors.  As the car was built in the 1957 – 1959 period and the Ford Falcon was not introduced until 1960, I understand that this was a pre-production engine from Ford.  The standard Ford Falcon engine was a 144 cubic inch (2,365cc) 90 horsepower vertically mounted six-cylinder engine, but for the Philson Falcon the engine was installed at an inclination of 30 degrees from vertical in order to reduce the overall height of the car.  The car is fitted with a 4-speed transmission.

The Philson Falcon Is Raced On A Regular Basis

If you look closely you can see that the body panels are not particularly smooth.  They seem to tell the story of races past, but this car was built to be a racer.  I also found myself wondering what would have happened if Ford had taken the concept of the Philson Falcon and made a small two-seat sports car with this tuned engine to take on the British sports cars of that era?

If you have any comments or questions about this post then leave a comment below or you can send me a private email message at the following address: shanna12 at comcast dot net

2 Responses to The Philson Falcon