This past week I was very pleased to be able to acquire a complete digital collection of all of the editions of the magazine “Canada Track & Traffic”.  This was a magazine that I often read when I was teenager and was very much responsible for developing my interest in racing and rallying.  Certainly I was interested in the American muscle cars of those years, but Canada Track & Traffic made me aware that cars had the handle and stop as well.

This magazine was published from 1959 to 1972 and it is extremely interesting to look back on those years as documented in this magazine about the cars, races, rallies, people, and places that seem so familiar despite the passage of time.  What is also interesting is to see the advertisements about cars and products that have long disappeared.  An example is the following advertisement taken from the first edition of Canada Track & Traffic in which the British Ford cars were promoted.  All of those cars have been gone for years. 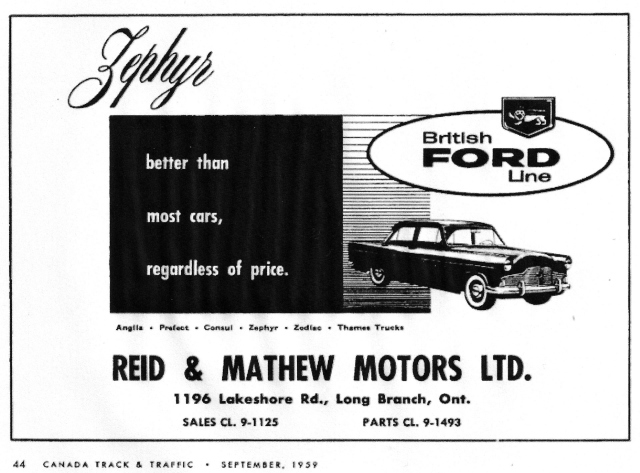 Remember the Anglia, Prefect, Consul, Zephyr, or the Zodiac?

The assembly of this digital document is the work of George Webster in Oakville, Ontario, Canada.  I was made aware of George’s work by Walt Kammer, a well known rally person in the western New York area.  I was able to contact George as he is making the DVD available to automotive historians for $25 plus shipping and handling ($5 in Canada and $8 in USA), and I acquired the magazine library on a single DVD. And the good thing is that the money from this project will be used to produce other racing archives.  So who know what else might become available in the future!

I don’t want to plaster George’s contact information all over the world, but if anyone is interested in getting this great DVD with the complete set of Canada Track & Traffic, please contact me at my email address below and I’ll put you in contact with George: