Recently I was contacted by Tim Wise who told me about a car that he has – a 1969 Mustang E.  This is a car that I have never heard of.  Apparently it was built by Ford specifically to compete in the Mobilgas Economy Run.  In the 1940s, 1950s, 1960s the Mobilgas Economy Run was a popular and widely publicized motoring event.  Also in the late 1960s there was the beginning of concern over fuel consumption by automobiles. 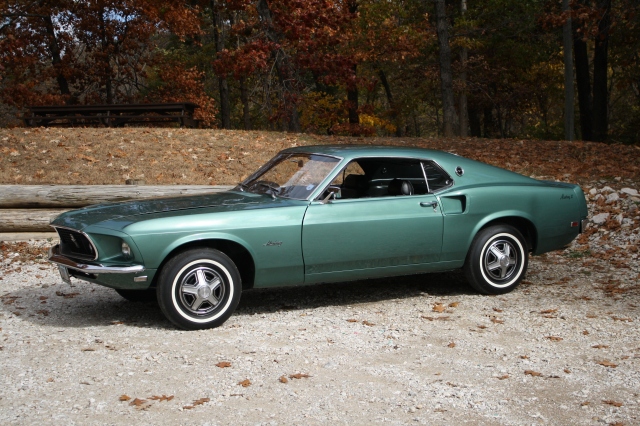 From a styling point of view, the Mustang E looks like the standard 1969 Mustang except for the “Mustang E” decal on the rear quarter panels. Tim’s car was very well restored by him and his wife over a four year period.  The Mustang E was a basic Mustang as demonstrated that air conditioning was not an option with the Mustang E because air conditioning decreases gas mileage.

The 250 cubic inch 6-cylinder engine was new for 1969.  The Mustang E cars came with a three-speed automatic transmission equipped with a one inch larger diameter than standard high stall torque converter and a very high 2.33:1 rear axle ratio. The engine was rated at 155 horsepower and with a torque of 240 pound-feet, identical to the standard six-cylinder Mustang.  However with the special torque converter and higher rear axle ratio made the Mustang E significantly slower, but more fuel efficient, than the standard Mustang six-cylinder car.

The Mustang E needed 13.3 seconds to reach 60 mph from a standing start and 19.4 seconds to travel a quarter mile.  The standard six cylinder Mustang had a 0 to 60 mph time of about 10.6 seconds and would cover the quarter mile in 18.1 seconds.  The top speed was 104 miles per hour. 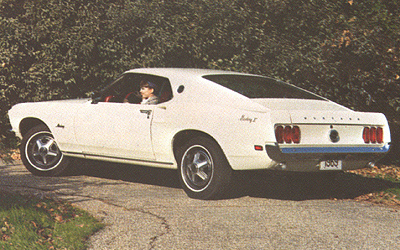 Ford only made 50 1969 Mustang E cars.  For the Mobilgas Economy Run, the rules said “that cars competing in the Mobil Economy Run represent models being purchased and used by the public in substantial quantities”.  A production run of 50 cars would satisfy that requirement.  With such a small run, it is understandable that this model was not highly promoted by Ford.  And unfortunately for Ford on December 20, 1968 the Mobilgas Economy Run, for which this car was built, was cancelled forever and Ford did not get a chance to fully showcase and promote this car.

As only 5o 1969 Mustang E cars were built and as perhaps most buyers were not aware of the significance of these cars, it is suspected that only a very few still remain.

If you have any comments or questions about this post or any further information on the Mustang E, then leave a comment below, or you can send me a private email message at the following address: shanna12 at comcast dot net

This entry was posted in Uncategorized and tagged Mobilgas Economy Run, Mustang E. Bookmark the permalink.

5 Responses to The 1969 Mustang E: A Very Rare Mustang