Posted on September 8, 2018 by Steve McKelvie

Just the other day I got an email message from Brian Harper.  Brian is a Canadian freelance auto writer for the Postmedia News Network.  I met Brian while we were competing against each other at Targa Newfoundland in 2003 and we have kept in touch over the years because of our common interest in cars.  He was recently at the Rolex Monterey Historic Automobile Races and came upon the Witton/Chevy Special – a unique Canadian car.  The pictures and the story below came from Brian Harper.

Brian wrote: There had to be a car among the hundreds from other countries represented — including Israel in the form of the Sabra sports car — that was uniquely Canadian. I found one 10 minutes later, the flag on a very sleek, very red, front-engine race car with a huge power dome atop the hood, three serious-looking air intakes and large exhaust headers gracing the sides. Its history on a board next to it described the roadster as a 1959 Witton/Chevy Special. Perfect!

The Special, as I read down the board, was the handiwork of one Leonard Fredrick Hugh Witton, an Englishman living in Montreal. Apparently, Witton was quite the renaissance man; not only was he a builder of race cars (about 10 Specials in all), he was also a mock-up engineer for Boeing and a world-class clock maker. While most of his Specials were small-engine racers, the Witton/Chevy was Chevrolet V8-powered, his most ambitious project.“Working in the basement of his house,” read the biography, “much racing technology from the ‘old school’ went into the project.” This included using chicken wire and plaster to form the body and chalk lines on the floor for chassis design. Lacking the resources to properly test and sort out his cars, “the streets of Montreal were often echoing with the roar of his race cars, which also gave him notoriety.” 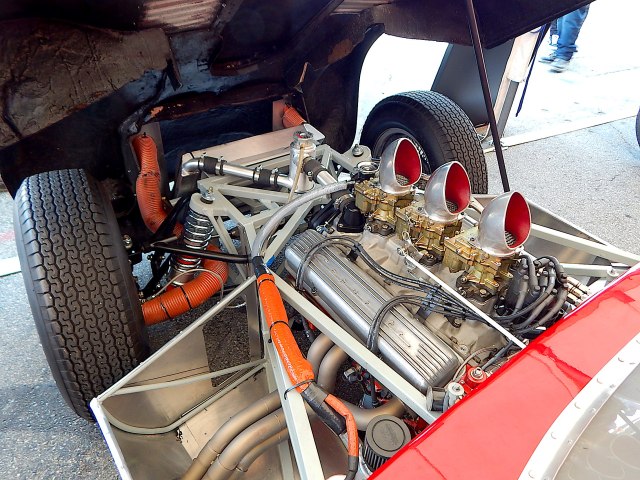 The Chevrolet Corvette 283 Cubic Inch Engine With The Three Carbs

Unfortunately, the Witton/Chevy Special was not particularly successful, being down on power — its 283-cubic-inch Corvette V8 with three two-barrel carburetors put out about 300 horsepower — in comparison with its rivals, as well as suffering mechanical issues. Driver George Pepper of Ottawa did win several amateur events between 1963 and 1965, but sold the car the following year for $1,800.

After being driven on the street for a few years, the car disappeared for more than three decades, until 1999 when Jim Collins of Vermont, while checking out old cars in a garage just south of Montreal, found the deteriorated Witton and bought it. After several years of restoration and a few races, the car was sold in  2004 to Wes Abendroth of Carson City, Nevada, the current owner.

I found Brian’s story very interesting and he gave me permission to post it on this website.  In the above photo I was interested in what the apparent writing on the dash said.  So I enlarged the photo as shown below.  Look at it carefully!

Interesting Toggle Switch In The Center Of The Dash!

The writing on the dash says: “Job well done”, with a signature and possible date below that.  Then I noticed the label on the toggle switch in the center of the car.  Obviously somebody has a sense of humor.  It also appears that the speedometer was added to the car at sometime for road registration purposes as both odometers in the speedometer register zero miles, suggesting that the speedometer has never been functioning.

Many thanks to Brian Harper for sending this story to me!  If you have any comments or questions about this post, then leave a comment below or you can send me a private email message at the following address: shanna12 at comcast dot net

This entry was posted in Uncategorized and tagged Witton/Chevy Special. Bookmark the permalink.