This week I got some information from David Scothorn about a recent meeting that was held to celebrate 50 years since the London-Sydney Marathon was held in 1968.  This was a major endurance rally of that era and had an enormous world-wide following.  The London-Sydney 50 meeting was held on July 29, 2018 at the British Motor Museum in Gaydon, England. 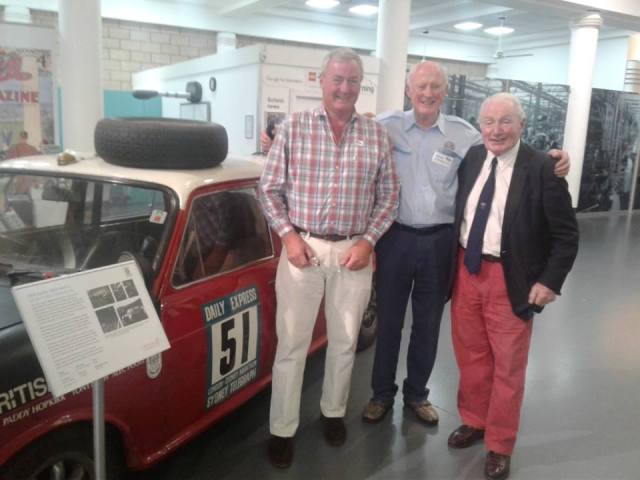 They are standing next to the Morris 1800 Landcrab, registerd as SMO 226G which Poole, Tony Nash, and Hopkirk drove to 2nd place in the London-Sydney Marathon behind Andrew Cowan’s winning Hillman Hunter. 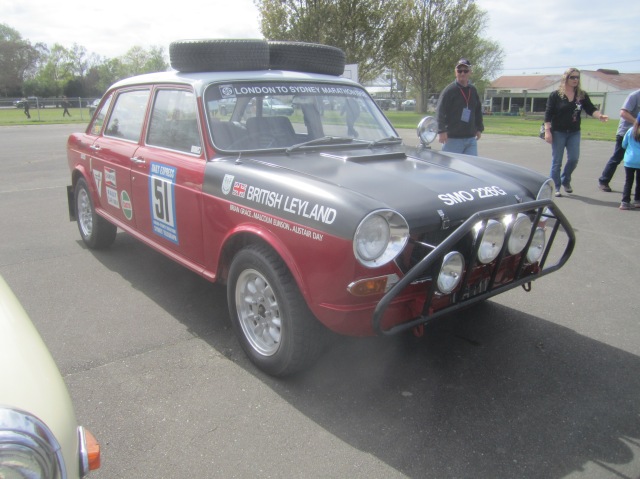 The Hopkirk/Nash/Poole car was somewhat involved in one of the most dramtic endings in endurance rallying history.  At the beginning of the last two competitive stages (actually the last stage was quite easy) the running order of the rally was Lucien Bianchi in the lead, Andrew Cowan in second place and Paddy Hopkirk in third.  It looked like that would be the way the rally would end.  Bianchi had such a lead that he passed off the driving chores to his co-driver, Jean-Claude Ogier, on that 97-mile long second last stage and tried to catch some sleep. 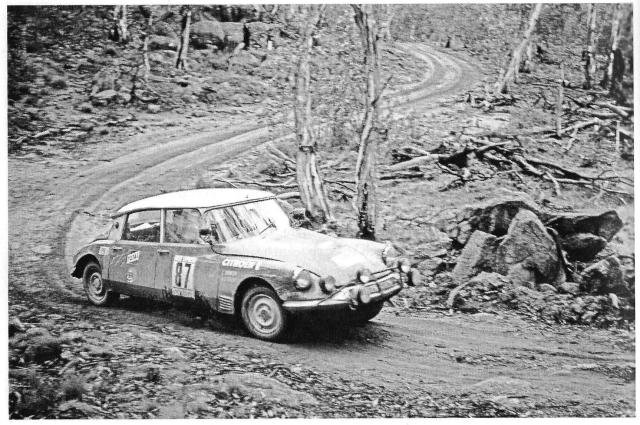 Bianchi/Ogier In Their Citroen DS Only Ten Miles From Disaster

Four miles from the end of the stage Bianchi/Ogier collided head-on with a Mini driving in the opposite direction when the road was supposed to be closed! Lucien Bianchi was thrown against the windshield, suffering serious leg injuries, and was trapped in the car.  The Hopkirk/Nash/Poole Austin 1800 was the next car on the scene.  According to Bill Price’s book, they stopped and Tony Nash and Alec Poole jumped out of the car with a fire extinguisher and bolt cutters.  Paddy Hopkirk drove back up the road where he had seen some press men with a two-way radio.  As soon as help had been summoned and Lucien Bianchi cut from the wreckage the Hopkirk/Nash/Poole car continued on its way.

The wreckage of the Bianchi/Ogier Citroen is shown below.

Wreckage Of The Bianchi/Ogier Citroen

As a result of the accident, everyone moved up a position resulting in a rally win by Andrew Cowan in the Hillman Hunter with Hopkirk’s Austin 1800 finishing second.  Quite a dramatic end!

Other endurance rally competitors from that era were also present. In the Austin Maxi MCE 7G shown below are Bronwyn Burrell ( now the owner) and Tina Kerridge (co-driver).  They along with Tish Ozanne (now deceased) did the next major endurance rally, the World Cup Rally in this car in 1970.

Bronwyn Burrell and Tina Kerridge In Their Austin Maxi

The above ladies are shown below in their 1970 team finery.

I understand that Burrell and Kerridge are planning on re-tracing the 1970 World Cup rally route in 2020 in this car.

Thanks to David Scothorn for sending me photos of the London-Sydney 50 meeting!

If you have any questions or comments about the London-Sydney Marathon or this post , then leave a comment below or you can send me a private email message at the following address: shanna12 at comcast dot net

This entry was posted in Uncategorized and tagged 1968 London To Sydney Marathon. Bookmark the permalink.

6 Responses to London-Sydney Marathon At 50