I have just acquired a copy of Marcus Chambers’ book “7 Seven Year Twitch”.  Marcus Chambers was the Competitions Manager at British Motor Corporation (BMC) from 1954 – 1961, hence the title “7 Year Twitch”.  I’ve been a long time getting this book, but this week I finally got a copy.  While I have found the book’s content interesting, the book’s cover is rather uninspiring.

The copy of the book that I got really shows its age.  There is discoloring around the perimeter of every page.  It looks much older than a book that was published in 1965. There is a small collection of photos in the book and I have included a couple in this post.

Note the picture in the middle above (Plate III).  By the way, you know a book is getting old when you see Roman Numerals being used.  Are these even taught these days?  But getting to the real issue, note Willy Cave checking out from a time control 1958.  This book was written in 1965 and I found the following portion of the description of Willy Cave written by Marcus Chambers on Page 35 interesting: “Seems to have solved the secret of perpetual youth as he has not aged to any extent in the six years I have known him.” That was written in 1965, presently in 2018 , 53 years later, Willy Cave, now in his 90s, is still actively navigating in car rallies.  It seems like Marcus Chambers had a premonition about this.

Some additional photos from the book are shown below. 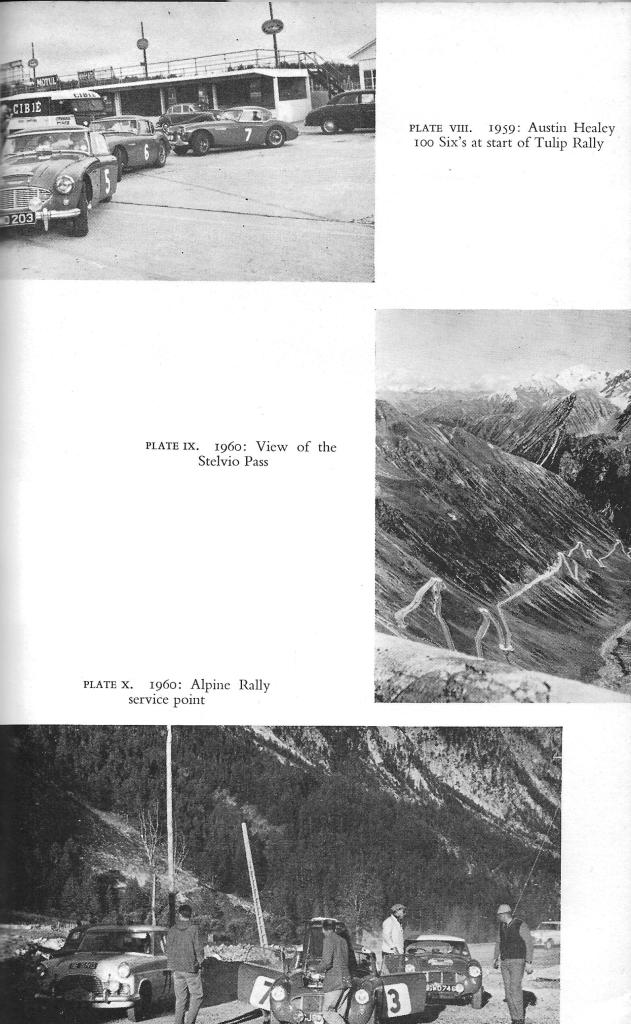 Note The Stelvio Pass Road in Plate IX Above

The Stelvio Pass is a legendary European pass that was a part of many rallies in those days and through to today’s rallies.  But it is a popular tourist route as people want to experience the Stelvio Pass.  I am reminded of the saying: “Nobody goes there anymore because it’s too crowded”.

At the back of the Chambers book, in Appendix F, he has included some route notes that BMC gave to its MGA crews regarding the Stelvio Pass.  I have included those notes below. 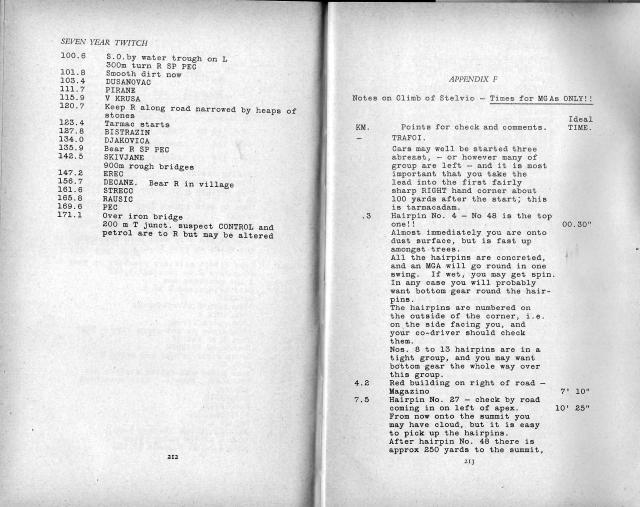 The Notes Continue below…

The crews were certainly asked to push, particularly on the downhill side of the pass.  I hope that they had good brakes!  The target average speed seems quite high considering this was written for a MGA car in late 1950s on a road with dozens of hairpins turns.  The target time was 42 minutes to cover 36.3 miles.

I still have great deal of reading to do in this book, but it sure looks interesting.  If you have any comments or questions about this post, then please leave a comment below or you can send me a private email message at the following address: shanna12 at comcast dot net

This entry was posted in Uncategorized and tagged BMC Rally Cars. Bookmark the permalink.