I recently acquired another car book written by Graham Robson.  This book is called “The Rover Story”, not surprisingly about Rover cars and the famous Land Rover.

Rover cars were never common in North America.  The thing that has always interested me about Rover cars was their acquisition and use of the 215 cubic inch (3.5 litre) V8 aluminum engine that had been developed, used, then discontinued by the North American car company, Buick, a Division of General Motors. Robson’s book explains how this engine made its way from General Motors in Detroit to Rover and other English cars such as the Triumph TR8.

The Rover V8 In A Land Rover

To provide some background, in 1961, Buick unveiled an entirely new small V8 engine with aluminum cylinder heads and cylinder block. Lightweight and powerful, the aluminum V8 eventually was offered with a turbocharger in the 1962-63 Oldsmobile Cutlass, the first ever offered in a passenger car.  The engine was known variously as the Fireball and Skylark by Buick, but it was also used in some of the smaller Oldsmobile and Pontiac cars of that era. The 215 V8 had a 4.24 in bore spacing, a bore of 3.5 in, and a stroke of 2.8 in, for an actual displacement of 215.5 cu in (3,531 cc). At the time the engine was the lightest mass-production V8 in the world, with a dry weight of only 318 lb.

The Buick 215’s very high power-to-weight ratio made it immediately interesting for automotive and marine racing. Mickey Thompson entered a stock-block Buick 215-powered car in the 1962 Indianapolis 500.  The Buick 215 was the only non-Offenhauser powered entry in the field of 33 cars. Rookie driver Dan Gurney qualified eighth and raced well for 92 laps before retiring with transmission problems.

Surplus engine blocks of the Oldsmobile F85 version of this engine formed the basis of the Australian Formula One Repco V8 used by Jack Brabham to win the 1966 Formula One world championship, although only the earliest engines had any Oldsmobile components. The majority of Repco RB620 engines were cast and built in-house at Repco.

Unfortunately, the great expense of the aluminum engine led to its cancellation after the 1963 model year. The engine had an abnormally high scrap ratio due to hidden block-casting porosity problems, which caused serious oil leaks. Another problem was clogged radiators from antifreeze mixtures incompatible with aluminum. It was said that one of the major problems was because the factory had to make extensive use of air gauging to check for casting leaks during the manufacturing process and was unable to detect leaks on blocks that were as much as 95% complete. This raised the cost of complete engines to more than that of a comparable all cast-iron engine. Casting-sealing technology was not advanced enough at that time to prevent the high scrap rates.

The connection between Rover and the Buick V8 came about totally by accident.  Some time in 1963 Rover’s Managing Director William Martin-Hurst was in Fond du lac, Wisconsin trying to sell Carl Keikhaefer on the idea of using Land Rover diesel engines for Mercury Marine boat motor business.  While they were talking in Keikhaefer’s experimental shop, Martin-Hurst noticed this aluminum engine sitting on the floor.  Marin-Hurst inquired about what is was and Keikhaefer told him that it was for a racing boat that he was going to work on and that he had winched the engine out of a Buick Skylark.  Martin-Hurst measured the engine up and saw that it was only 1-inch longer than Rover’s 4 cylinder engine.  He subsequently found out that the V8 engine was only 12 pounds heavier than the four-cylinder engine.  His main concern was the fact that General Motors had dropped the engine, so he wondered what the problems the engine had.

Rover worked on their own development of the engine and began to install the aluminum V8 engine in 1967 in the Rover P5.  At Rover, the Buick V8 was tuned to 160 horsepower.  Rover continued to build this engine for decades.

I am always interesting in car rallying, however Rover does not have the most extensive rallying history, but they had a bright moment in 1965 when Roger Clark/Jim Porter drove a Rover 2000 to sixth place Overall in that year’s Monte Carlo Rally. 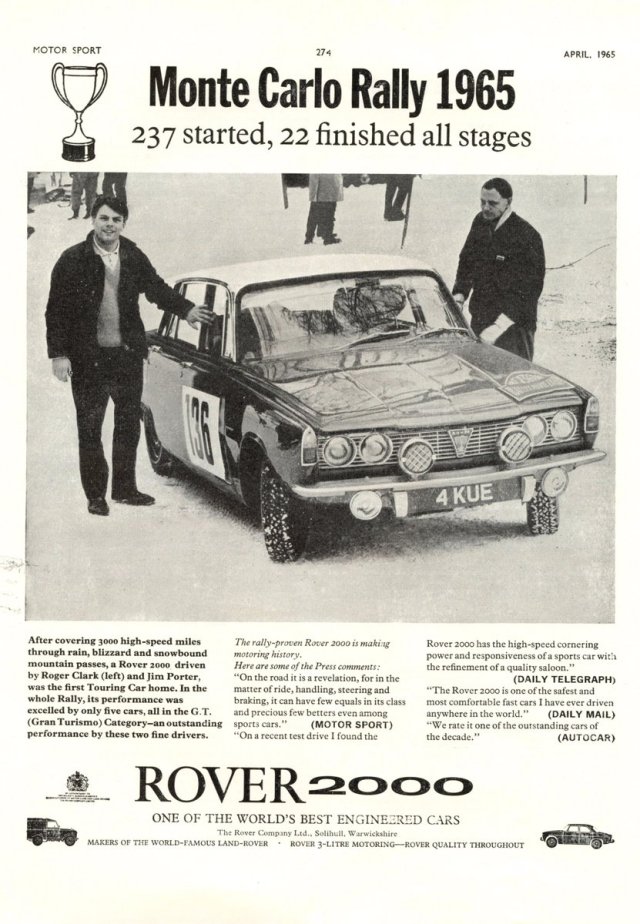 The Rover V8 eventually made its way into several other cars.  In the USA perhaps the best known of these other cars is the Triumph TR8.  In the Triumph TR8 the listed horsepower rating was only 133 horsepower.  Based on some of the previous information about this engine, the standard Triumph TR8 engine was in a rather low state of tune.

Rover V8 Engine With A Holley Carburetor In A Triumph TR8

The Buick 215 cubic inch V8 engine (the Rover V8) did have a long service life and while General Motors soon lost interest in it, Rover certainly made a success of it.

If you have any comments or questions about this post, then please leave a comment below or you can send me a private email message as the following address: shanna12 at comcast dot net

This entry was posted in Uncategorized and tagged Rover. Bookmark the permalink.

1 Response to The Rover V8 Engine