This past weekend I went to the Mass Cruisers Car Show in nearby Wrentham, Massachusetts.  There were many interesting cars there.  One of them was the 1963 1/2 factory Ford drag racing car shown below. 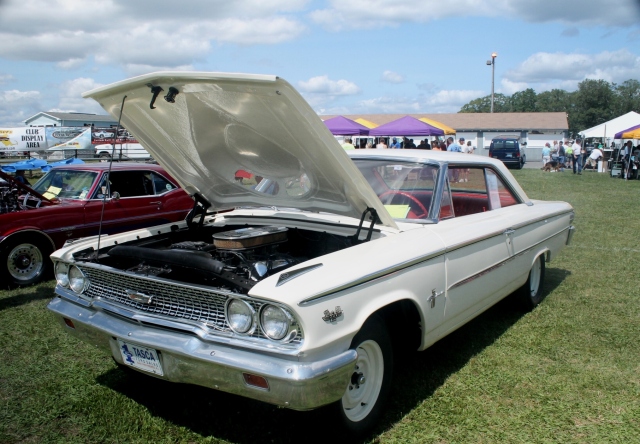 In the first part of 1963 Ford’s largest V8 engine available in the Ford line was a 406 cubic inch engine.  Ford needed a better engine to keep up with the Chevrolets and the Dodges.  To solve this problem in mid-1963 Ford built and installed the high performance 427 cubic inch V8 engine in a few of their top of the line cars.  In fact, Ford built 200 of these special Ford Galaxie cars.  Fifty, or 25% of Ford’s total production of these cars were shipped to one dealership, Tasca Ford in East Providence, Rhode Island.  This is one of those cars. 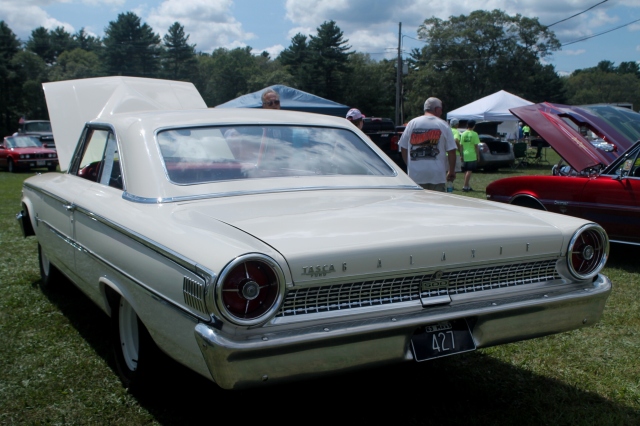 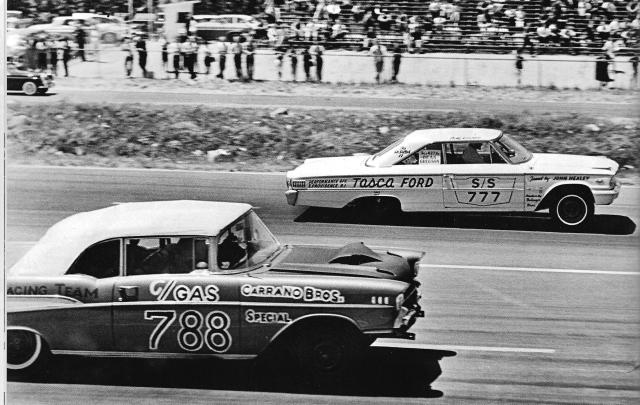 A Tasca Ford On The Drag Strip

In addition to the big 427 cubic inch engine, these cars built to weigh as little as possible in that era.  Many of the body parts were made from fiberglass instead of steel.  The bumpers were made from lightweight aluminum.  These cars weren’t built for much everyday street usage. 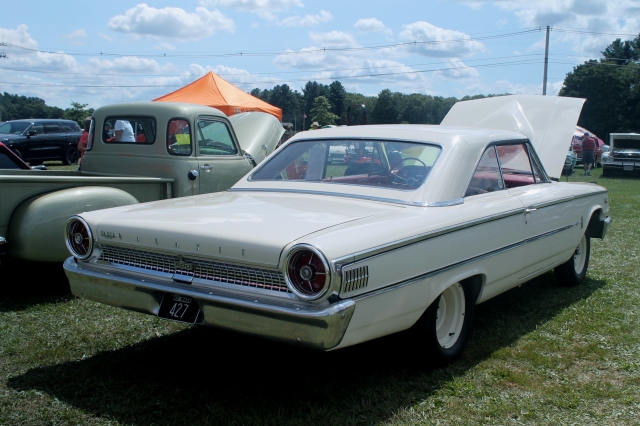 The Bumpers Were made From Aluminum To Reduce Weight 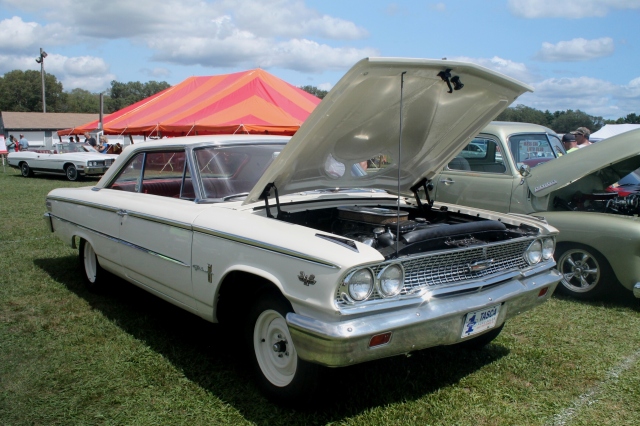 The Hood Was Made From Fiberglass

As I mentioned, Tasca Ford was a high performance car dealer.  Note the advertisement  below saying that they had 18 of these 427 Fiberglass Fords for sale to run in the Super Stock class.  In addition, they had A Stock and B Stock steel body 427 Fords, 289 V8 Fairlane 500 cars for the C Stock class, as well as Ford Falcons with a 260 cubic inch V8 to compete in I Stock.  If you wanted to go fast or go drag racing with a Ford car on the east coast of the United States, then you went to Tasca Ford. 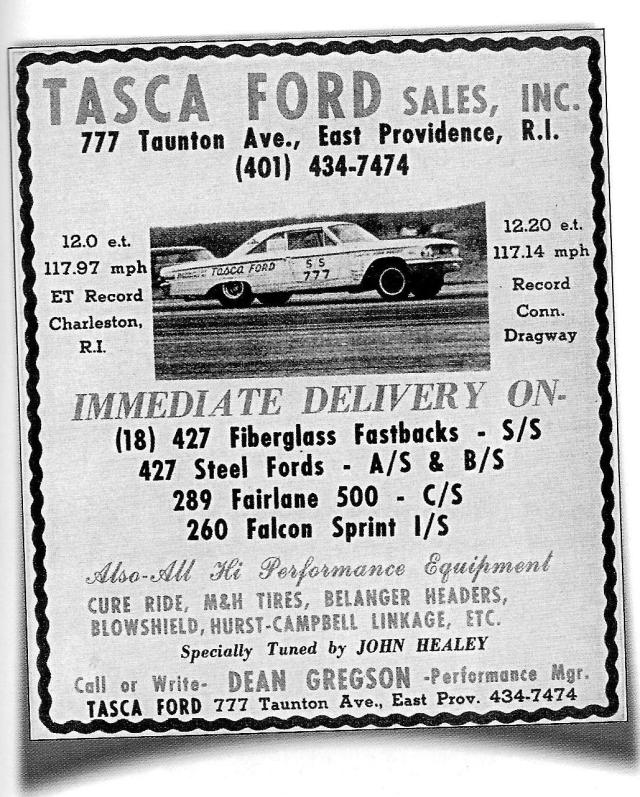 These cars also came with the “radio delete” option – that meant a bare bones car.  If you look at the interior below, you can see that there is no radio and there is not even a heater.  Anything that was not necessary to meet the rules was eliminated to reduce the car’s weight.  This car was built to go fast in a straight line. 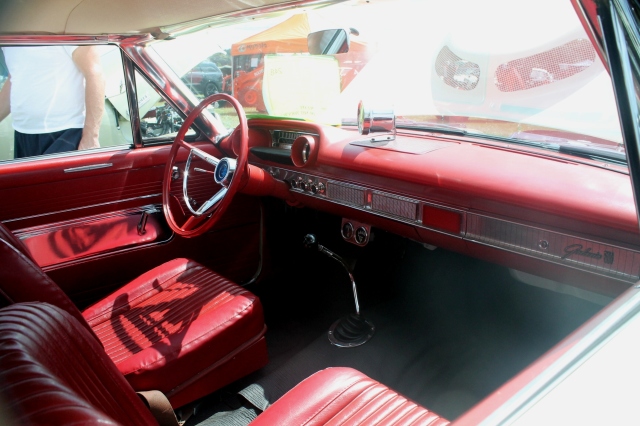 The 427 V8 engine was fitted with two four-barrel carburetors.  I was going to look up how much horsepower that these engines produced, but in reality, in those days, the engine’s horsepower was often under-reported by the manufacturers.  Suffice to say, these engines were among the most powerful V8 engines available at that time.  This era was just before the smaller “pony” cars appeared on the market, so at this time the fast cars were still big cars with big engines. 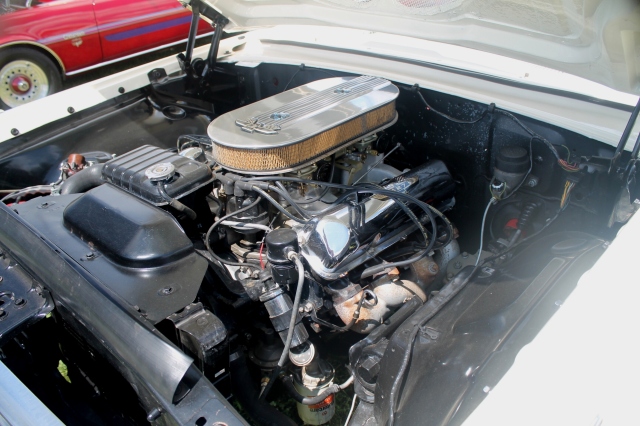 For more information about Tasca Ford and the high performance Fords, I would recommend the book by Bob McClurg: “The Tasca Ford Legacy”.  I got my copy a couple of years ago and the older images in this post were taken from this book.  The cover of this book is shown below. 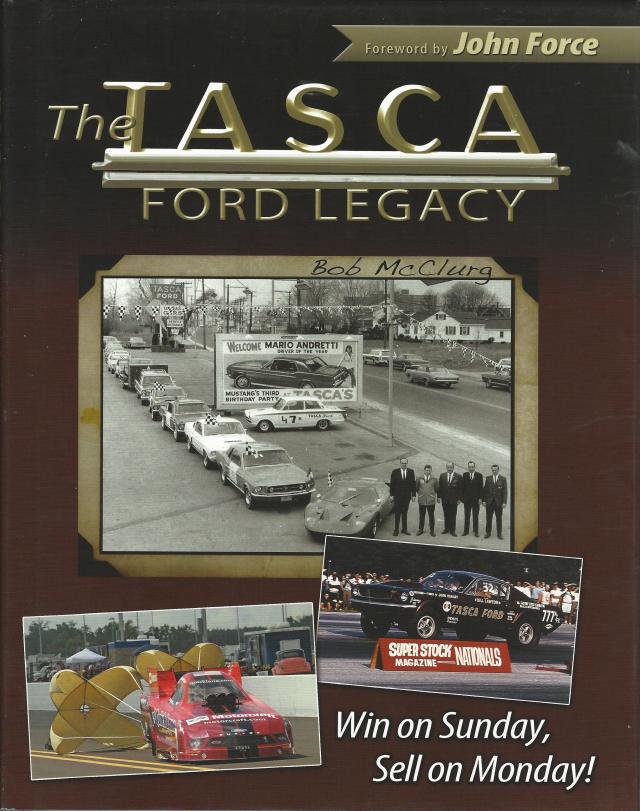 The black & white photo on the cover is interesting.  Note the Lotus Cortina parked below the “Welcome Mario Andretti” billboard.  I could not find a reference to this car in the book.  I wonder if they ever drag raced that car?  A Lotus Cortina drag racer???!!

If you have any questions or comments about this post, then leave a comment below or you can send me a private email message at the following address: shanna12 at comcast dot net

This entry was posted in Uncategorized and tagged 1963 Ford Galaxie. Bookmark the permalink.