During the last month I have been so busy with participating in rallies that I have hardly had an opportunity to update this website.  First I went to Europe to compete in the Paris To Prague Rally, then I returned home for two days before leaving to compete in the Great Race from Florida to Michigan in the USA.  These were both significant and yet completely different rallies.

The Paris To Prague Rally was a six-day rally through some very interesting parts of Europe.  I was navigating for Michael Eatough in his 1966 Mercedes-Benz 230S fintail sedan.  This rally had many regularity stages which were conducted using the “jogularity” timing method which was made popular in the demanding LeJog rally.  The LeJog rally is the based on the longest continuous distance that it is possible to drive in the United Kingdom.  This rally extends from Land’s End in southwest England to John O’Groats at the northern tip of mainland Scotland, hence the rally name LeJog based on the first letters of Lands End – John O‘ Groats. 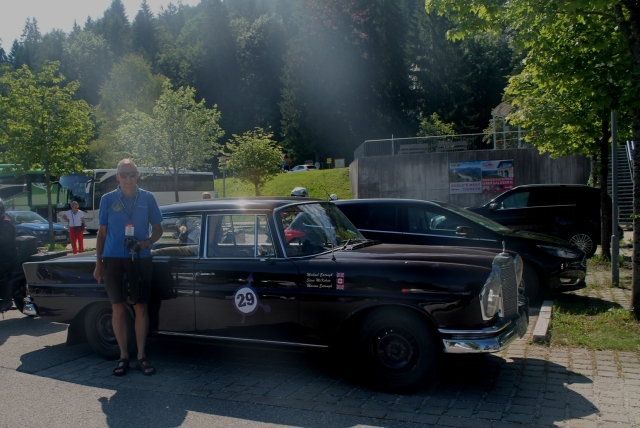 In addition to the regularity stages, there were some special tests that took place on private property.  These special tests involved following a path defined by traffic cones, while being timed, to the follow the defined path as quickly as possible.

Michael and I worked well together and we did reasonably well while continuing to improve as the rally progressed.  I am please to say that Michael has entered us in the 2019 Peking To Paris Motor Challenge which will be an epic 36-day rally from Beijing, China to Paris, France.  This will be quite an adventure!  I look forward to navigating through the sparsely populated areas of Mongolia.

Silver Baron Rally Team, Minus One: (R to L): David Wells, Harald von Langsdorff, and Myself.  (Paul Henshall Is Missing From This Photo)

Our rally car for the Great Race was a 1972 Mercedes-Benz 350SLC.  This car worked well through out the rally except for a brake issue that turned out not to be a lasting problem.  David and Paul did a great job of looking after the car. The Great Race is a Time-Speed rally where travel speeds and durations are given, but odometers providing any distance measurements are prohibited from being used.

It took us a few days to get our competition legs under us, but we finished strong and came away with an action plan for further rallies of this nature. During the course of this rally, we did manage to win four Aces, by scoring a zero timing error on four timed legs.  We also had quite a number of 1-second and 2-second legs.  Our problem wasn’t the lack of good leg scores, it was several legs with double-digit scores.

Now that I am back home, I will have some time to decompress and make some competition notes about these rallies, while the issues and ideas are fresh in my mind.

If you have any comments or questions about either the Paris To Prague Rally or the Great Race, then leave a comment below or send me a private email message at the following address: shanna12 at comcast dot net

4 Responses to Now At Home After Two Very Challenging Rallies