Today turned out to be the decisive day that I thought it would be.  Al-Attiyah decided that he had to push hard and the Peugeot team pushed as well with the results being a drastic new scene at the top of the field. 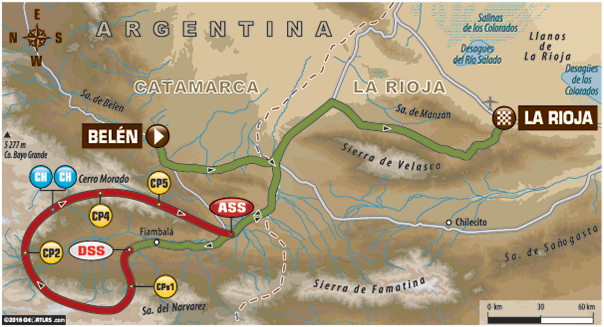 The Day 10 profile is shown below.  The elevation changes are not too extreme except for near Checkpoint 4.

As I noted earlier,  Al-Attiyah decided that he had to push, but things did not work out well for him.  He rolled the car and eventually finished 52 minutes behind the stage winner. After the stage Al-Attiyah had the following to say:

“We did a barrel roll after we hit an embankment 10 km into the special, and it took us a while to put the car back upright. We had to take risks today… After that things got tricky because the car was damaged and we had to finish the stage without further problems. At the end of the day, I’m happy to make it to the finish. The ceiling and the cooling system were broken, and we had to stop several times to check whether everything was in order. Despite the adversities, we limited our losses to Giniel and Mikko. We’re second overall, and now we have to try and defend this position.”

Peterhansel had a good day winning the stage with almost a 6 minute margin over Cyril Despres in second.  He said the following:

“We had a terrible start to the special. We got lost at km 32 and wandered around for at least 15 minutes. I blew a fuse because I thought I’d lost everything. We took risks and threw caution to the wind. We pushed very hard because we knew today was the decisive stage. It was a stage with very tricky navigation, off-track sections, drainage channels… Everything that makes rally raid hard. As usual, this is where you see huge gaps. I had a flat tyre and started screaming my head off, I was a bit out of my mind today. However, when we got going, we were fast. We took a huge leap in the overall. It’s also good to know we’ve got Cyril right behind us to give us a hand. He’s helping us out even though he wasn’t supposed to do that at the start, it’s awesome.”

Dakar 2016 took a dark turn against Carlos Sainz today.  He finished 6 hours behind Peterhansel.  This effectively ends the 2016 Dakar for Sainz.  There is still some valuable team work to do, but for him it’s over.

Sainz’ bad day makes thing increasingly tense for the Peugeot Team.  After the start of the second half of the 2016 Dakar rally, things have been going down hill for Peugeot.  They have gone from filling the podium to having only one car on the podium and it’s not over yet.  The good news for Peugeot is that they now have a 1 hour lead over second place, thanks to the problems experienced by Al-Attiyah today.  The current overall standings are shown below.

As Peterhansel now has a 1 hour lead over second place, I believe that Peugeot will now assign an escort car to shadow Peterhansel and render any needed assistance to keep him moving and help him if there are any navigation questions.  Peterhansel can slow down over the next three stages and still have a comfortable margin.  If he loses 10 minutes a day over the last three stages, he would still be ahead by 30 minutes.  What is important for Peterhansel and Peugeot is to get him to the finish.  This has now become very stressful for Peugeot.

There will be some interesting competition for the last two positions on the Dakar 2016 podium.

This entry was posted in Uncategorized and tagged Dakar Rally. Bookmark the permalink.