Bentley And The Blue Train

This past week Jim Blumenfeld sent me some pictures of a Bentley “Blue Train” car that he saw during a recent trip to a car show in Florida.  This is an interesting car with a very stylish fastback design.  I also wonder if this lowered roof line was the inspiration for the “hot rod” styling technique of chopping the top?

The Bentley Blue Train, like many things associated with Bentley, has a very interesting story behind it.

During the 1920’s the Bentley cars developed a mystique about them.  The Bentley cars won Le Mans five times – 1924, 1927, 1928, 1929, and 1930.  In 1929 Bentley cars finished 1-2-3-4!  Very impressive for any manufacturer, but Bentley was almost a start-up as the owner, W.O. Bentley, only built his first car in 1919.  Despite all of this racing success, Bentley was always in financial trouble.  By 1926 Bentley was looking for financial assistance and he did not have to look far.  One the Bentley race car drivers, known collectively as the “Bentley Boys” was Woolf Barnato, who had a great deal of money.

Woolf Barnato was the son of Barney Barnato who with Cecil Rhodes, owned the Kimberley diamond mines in South Africa.  When Woolf was only two years old Barney Barnato disappeared overboard when sailing home from Africa, so Woolf inherited a major fortune.  Eventually W.O. Bentley lost control of the company and Barnato became the Chairman of Bentley.

In 1930 Barnato was not only the Chairman of Bentley, he probably was their best driver.  As it turns out, as frequently occurs with people of wealth, he found himself in a bar in Cannes, France regaling people with stories of the speed of the Bentley cars.  One thing lead to another and Barnato eventually bet £200 that if he left from Cannes in his Bentley, then he could beat the famous Blue Train to Calais, France.  Further he said that he could be at his London club before the Blue Train even got to Calais!

At 05:45 the next afternoon both Barnato and the Blue Train left Cannes.  Barnato was accompanies by an amateur golfer, who would be available as a relief driver.  Barnato was driving a Bentley Speed Six.

Barnato had telegraphed ahead to arrange for fuel stops to be ready on his way to Calais.  He knew that the Blue Train had a major stop in Marseille which would slow the train’s overall average speed.  At 10:30am Barnato reached Calais, after traveling about 570 miles from his start in Cannes and they boarded a small packet steamer heading to Dover, England.  Arriving at Dover, Barnato set off on the final 80-mile dash to London. At 3.20pm Barnato parked the Bentley Speed Six outside the Conservative Club in London’s St James’, just four minutes before the Blue Train arrived in Calais.

The story of this feat became part of the Bentley mystique and this was also made famous by a painting by Terence Cuneo. 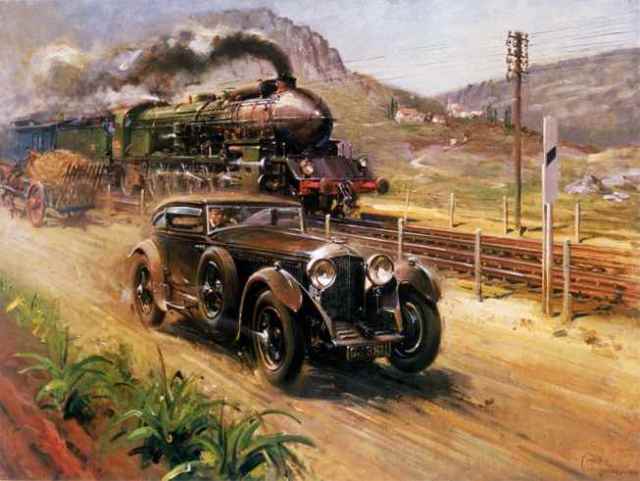 The matter of what car Barnato was driving during his race with the Blue Train has been something of a controversy.  For years, it was assumed that Barnato was driving the fastback styled coupe with a body styled by Gurney Nutting.  This is the image shown on the Terence Cuneo painting.  The problem with this is that Barnato did not take delivery of this car until May 21, 1930, while his race with the Blue Train took place on March 13, 1930 – two months before!

Barnato Drove The Bentley On The Left, Not The Car On The Right

Over the years, Bentleys with the fastback design have been known as the Blue Train Bentley.  And while these cars are what Barnato called the Blue Train, they are not the type of Bentley that Barnato used. 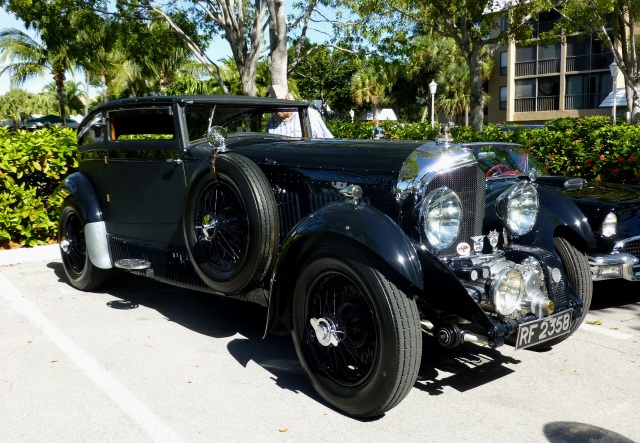 These cars had an interesting 2+1 coupe design where the back seat had a single seat facing sideways.  Based on the dimensions of the back seat of many cars, Bentley might have been onto something with that layout. 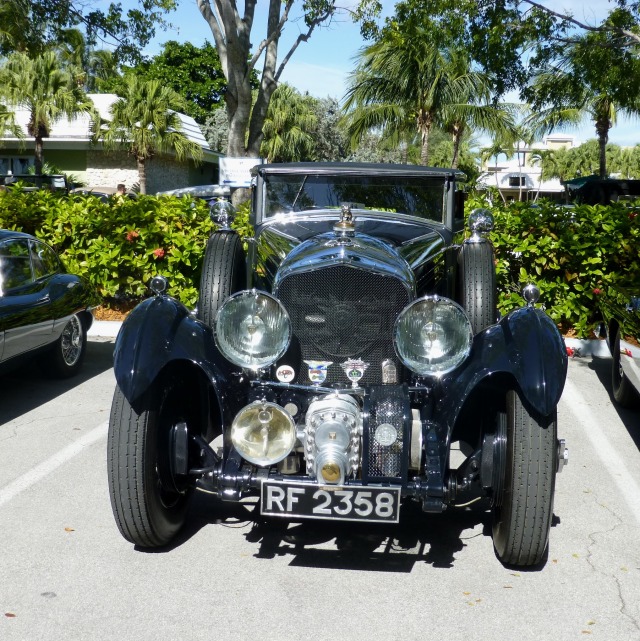 The specifics of the car shown in Jim’s photos are not known to me, but clearly it is very similar to the car that Barnato named the Blue Train

The thing that I have noticed about Bentleys is the impressive size of these cars, while knowing that these cars were the basis for very successful race cars.  I find it hard to imagine the skill needed to drive these big cars fast.

The Guages Look Very Modern In This Car.

Eventually Woolf Barnato got tired of losing money on Bentley and due to the world wide depression, the outlook was not good for expensive cars like the Bentley cars.  The company went into receivership and was put up for sale.  Many people thought that Napier would buy the company, but it turns out that a slightly higher bid price was submitted and Rolls-Royce became the new owner of Bentley.

This entry was posted in Uncategorized and tagged Bentley cars. Bookmark the permalink.