Posted on September 9, 2014 by Steve McKelvie

On Labor Day weekend I went to the Lime Rock Historic Festival.  This is an annual must-see event with a spectacular gathering of vintage road cars and race cars.  I was able to combine a wonderful motorcycle ride through rural Massachusetts and Connecticut with the visual splendor of the cars at the Lime Rock Historic Festival.  Throughout the upcoming weeks I will be posting about some of the cars that were at Lime Rock for the “Sunday In The Park” car show.  This Jaguar XK140 is one of them.

At Lime Rock Historic Festival you will find cars on display all around the 1.5 mile track.  Typically, some of the special cars or featured marques are on display on the front straightaway.  I had the opportunity to tour the entire track with VSCCA Chief Steward Bob Melhado.  On the backside of the track we spotted a spectacular Jaguar XK140 drophead coupe.  This is a car that was a must-see car!  It had just been restored to a very high level and was very impressive. 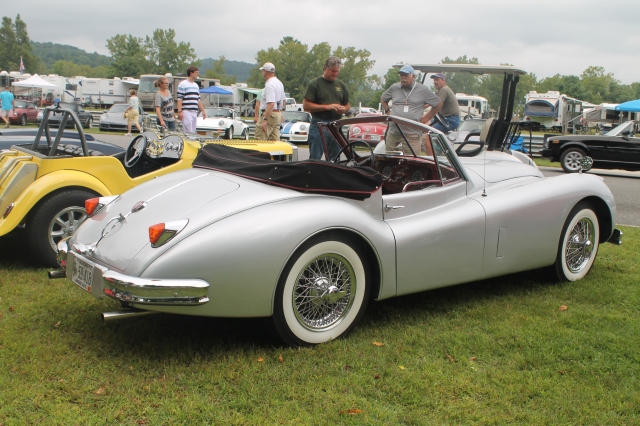 All Of The Chrome Has Been Upgraded

The car’s owner, Stanley (I lost his business card on the way home.  I think that it blew out of my pocket while I rode the motorcycle.), who lives in both Maine and Texas, noted that there was only 53 miles on the car.  He said that it was restored to a high level with all of the touches that he wanted.  (By the way Stanley, if you should see this post, please let know you last name and I will include it in the post.)

The Elegant Interior Was Spotless

The Jaguar engines of the 1950s were both powerful and nice to look at.  The engine in this Jaguar XK140 is no exception.

The Jaguar Engine Was ReBuilt As Well

The base Jaguar XK140 was powered by a 3,442cc dual overhead camshaft six-cylinder engine that produced 190 horsepower.  This was 30 more horsepower than the earlier XK120 which had the same engine as the Jaguar XK140.

A Lovely Blend Of Paint and Chrome

The lesson to be learned from the Jaguar is that when you visit the Lime Rock Historic Festival next Labor Day weekend, be sure to check out all of the cars around the track.  There are spectacular cars to be seen everywhere and this Jaguar XK140 is a great example.