We Made The Sports Pages!

I am still recovering from jet lag from my recent trip to Germany to compete in the 2014 Baden Classic car rally.  While there I was surprised to be encountered by local newspaper reporters at the finish.  They took some photos and interviewed us as we were enjoying our post-event glass of champagne.  This resulted in the following newspaper article which was given to us by the hotel-keeper where we were staying. 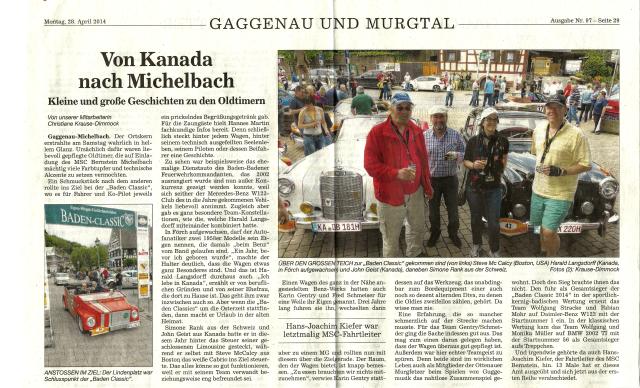 Article From Local Newspaper About the 2014 Baden Classic

The larger picture in the newspaper shows from the left myself, Harald von Langsdorff, Simone Rank, and John Giest.  Harald & I competed together in the white 1958 Mercedes-Benz 220S Cabriolet, while Simone Rank and John Giest competed together in the black 1958 Mercedes-Benz 220S Coupe.  It found it interesting that the reporter spelled my name “Steve McCalcy”.  I have had the spelling of my name butchered before, but that was a new one for me.

Harald and I have competed in this event several times, but this was the first car rally for both John and Simone.  John and Simone did very well, scoring higher than many other cars.  John is a Project Manager with a construction firm in Ontario and Simone works for Mercedes-Benz in Zürich, Switzerland.

Harald & I had a water hose leakage problem, a cut finger, and a very bad nose bleed all occur within a period of 5 minutes.  These distractions caused us to make a mistake a few minutes later, which due to the continuous scoring system  resulted in us paying for this mistake over five controls.  This caused us to snatch a third place finish from the jaws of a first place class victory.

I will have more on this rally as I get back to normal.