Today my 2014 Kenzie Car Calendar arrived in the mail.  I have got a Kenzie Car Calendar almost every of the nine years years that Jim Kenzie has sold these calendars.  I have known Jim for years, as we first met while competing in Targa Newfoundland, where Jim is a three-time Open Division champion. 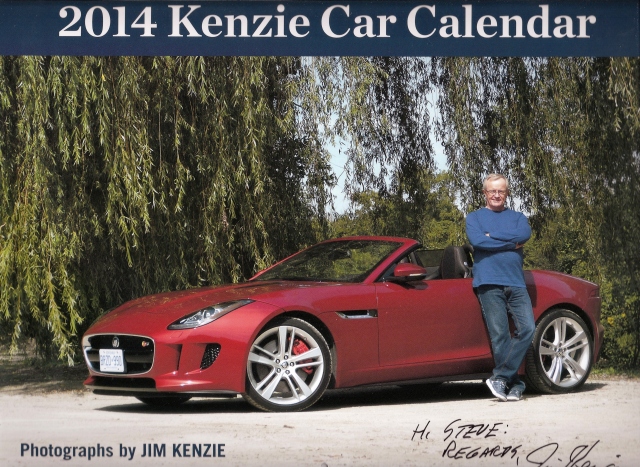 Jim Kenzie is Canada’s foremost automotive journalist.  He is Chief Auto Reviewer for the Toronto Star’s Wheels section which for 30 years has been a leading Canadian automotive publication.  Jim is also on television on TSN’s Motoring – Canada’s most-watched automotive program.  As a result of his day jobs, Jim has the opportunity to drive some very interesting cars all over the world.

The Kenzie Car Calendar is based on photographs that Jim has taken during the last year while testing cars.  The cars and locations on this year’s calendar are as follows:

Thumbnails of the photos of these cars are shown below.

Images During The Year On The Kenzie Car Calendar

These calendars are available from Jim for a price of $14.95 at Jim’s website at www.jimkenzie.com   The best thing about the Kenzie Car Calendar is that half of the net proceeds will be donated to Parachute, which is a group dedicated to the safety of teenagers.  Parachute wants to bring attention to the issue of preventable accidents and injuries – therefore the money is going to a great cause.

It is interesting to note that despite having the opportunity to drive these very exotic cars, Jim keeps a 1977 American Motors Hornet hatchback in his barn in Halton Hills, Ontario.