I often get some interesting emails from people who have questions or stories that they want to pass on to me.  One that was particularly interesting came about two weeks ago from a fellow from in Europe who was looking to make contact with Ronnie Adams’ son in hopes of getting information about the 1936 Circuit of Ireland Trial.  The writer’s uncle, Wycliff Holmes, who is still alive, was one of the three drivers on the team, including Ronnie Adams, that won the 1936 Circuit of Ireland Trial.  The writer had seen from my posts about Ronnie Adams, the 1956 winner of the Monte Carlo Rally, that I knew Ronnie Adams’ son, Kenneth Adams.  He thought that Kenneth Adams might have some additional information about this event.

I was able to pass along the following write-up that Ronnie Adams included in his book “From Craiganlet To Monte Carlo”:

Extract From “From Craigantlet To Monte Carlo” By Ronnie Adams

Wick Holmes’ nephew was able to obtain some information about the event from Mr. Peter Allen who is the unofficial club archivist of the Ulster Automobile Club Limited.  The following photo shows the winning car and team from the 1936 Circuit of Ireland Trial. 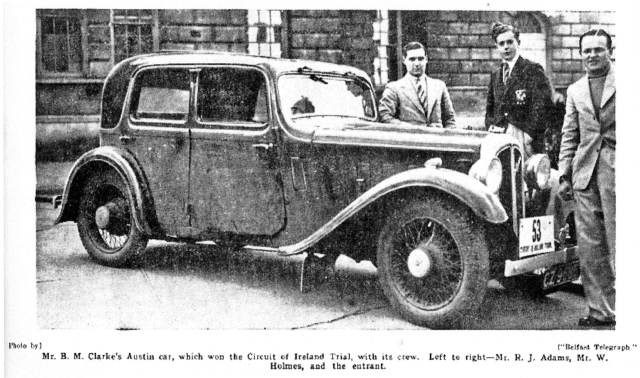 In the above photo, the drivers from left to right are Ronnie Adams, Wick Holmes, and Basil Clarke.  The car they were driving was an Austin 16.  That young man, Wick Holmes, is considerably older today than he was in 1936!

The Ulster Automobile Club Limited archivist was also able to provide information about the scores from 1936.  These are shown below:

The only other name that I recognize from this list is Miss E. Haig, who is listed as a non-starter.  Miss Haig, better known as Betty Haig, continued to compete in major rallies after World War II in a MG Y-Series Sedan.

The following is the remainder of the 1936 Circuit of Ireland Trial results:

On the scoring summary it can be seen that almost no cars were penalized while on the rally route.  The results of the rally were effectively decided by the times in the two tests – Test A and Test B.  The following describes these two tests that were key to the final results of the 1936 Circuit of Ireland Trial.

For more information about this rally, click on the following file of a couple of club monthly newsletters which describe the rally in detail         Circuit of Ireland 36 UMR March & April

I think that it is great that rally competitors from that era are still around to pass down stories to those who compete in rallying today.

If anyone who might read this has further information about this event please let me know so that I can pass it on.