H&H Classic Rallies recently held their initial Paris to Madrid Rally for the Charles Jarrott Trophy.  This trophy is named after Britain’s first motor racing champion and the person who finished 4th in the 1903 Paris-Madrid.  The 1903 Paris-Madrid race was the last of the great city-to-city races that took place in the early days of motoring.  There were 221 cars of varying speed capabilities that started this race on May 24, 1903. The narrow roads at that time were bordered by trees, ditches and thousands of uncontrolled spectators.  The race cars were capable of speeds up to 90 miles per hour but the car’s brakes could not handle those speeds.  This all made for a dangerous situation.

Unfortunately, the 1903 race had to be halted in Bordeaux, at the first control, about 342 miles from Paris, as up to that point there were 8 deaths and numerous casualties.  Fernand Gabriel driving a Mors was declared the winner.  He had started in position 168 on the road, but managed to pass 79 cars by the time he got to Bordeaux.

The painting below, by Carlo Demand, as included in the book “Carlo Demand In Motion And Color” by Gary Doyle, shows Gabriel passing some wrecked cars on his way to Bordeaux. 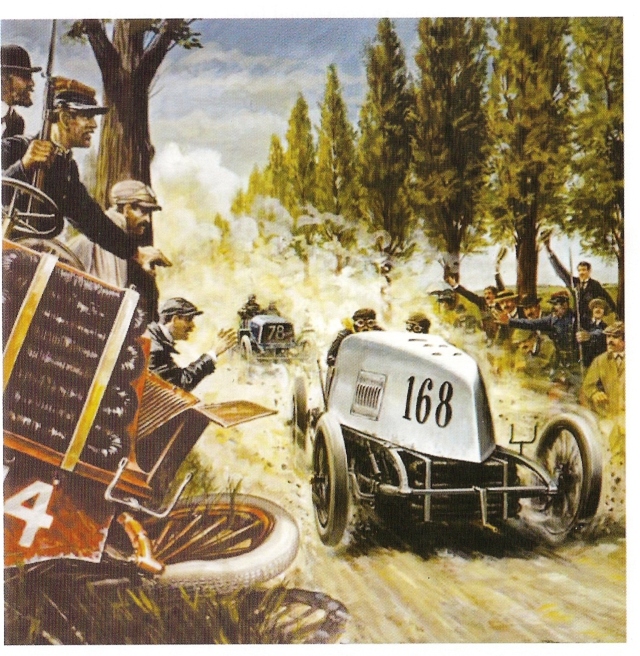 At 0630 hours on May 24, exactly 110 years and three hours since the start of the original race, the 2013 Paris Madrid Rally was flagged away from Versailles as more than 50 pre-war cars set off on the 820-mile run to Madrid.  In further tribute to the original race, H&H Classic Rallies had arranged for Charles Jarrott’s great-nephew, Nigel Herring, to wave the starting flag at Versailles. The 2013 rally three-day event was based on the original race schedule and route where possible.

From a 2013 field comprising no less than 18 marques and as many nationalities, the overall winners were Alastair Caldwell and Catriona Rings in their beautiful 1938 Alfa 6C, the most technically advanced machine on the rally. Second were Rudi and Helga Frederichs in their 1932 Alvis Speed 20 and third were Roland van Pelt and Olima Khaitova in their 1934 Bentley.  There were two North American participants – Peter van de Zilver as navigator in a 1925 Buick Standard Six and Lennox McNeely as the driver of a 1927 Chrysler 75.

H&H Classic Rallies is planning on running this rally again next year.