The “White Riley”, The ERA, And The Healey Cars 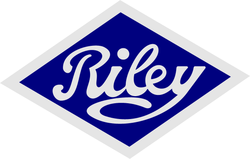 Riley started off as a bicycle manufacturing business, but it went through some changes to its business into engines and then by 1913 the business became the Riley (Coventry) Limited which focused entirely on automobiles.  The first real sporty Riley was the Riley Brooklands which first appeared in the mid-1920s.

During the 1920s and 1930s Riley cars won the Brooklands Five-Hundred, finished second and third overall at Le Mans in 1934, won the Tourist Trophy three times in five years, and had a class win in the Monte Carlo Rally.  Some of the other Riley sporty cars that were produced during this this period were the Riley Sprite and the Riley Ulster Imp. 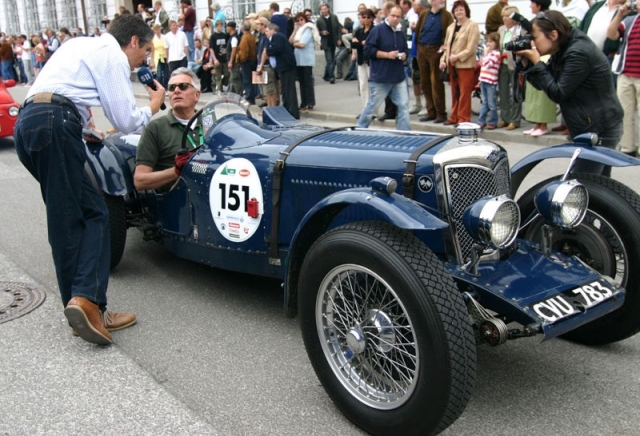 I saw the Riley Ulster Imp pictured below at the Lime Rock Historic Festival in 2010.

The most famous of the Riley cars was the “White Riley”.  This was a special race car built by Riley for race car development purposes.  This car was also the “test mule” for the development of the even more famous ERA (English Racing Automobiles) voiturette race cars in the 1930s.

While the “White Riley” was used as a test mule for the ERA, it is unfortunate that the ERA cars did not look more like the Riley cars.  The ERA race cars have a very plain, upright, “agricultural” look to them, while the lines of the Riley sports cars are much more attractive. 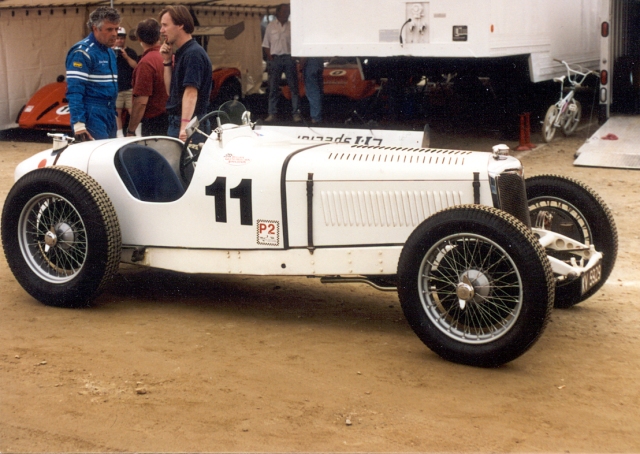 The “White Riley” Is An Attractive Car

The ERA race car that came from the “White Riley” was very successful; winning a large number of races from 1934 to 1939.  It has been said that relative to the number of ERA cars built (17 total Types A through D models) that the ERA won more races than any other marque.

Riley built their engines in both 4-cylinder and 6-cylinder versions. These engines were also built with numerous displacement sizes. All of the engines had a similar design – hemispherical combustion chamber, intake and exhaust valves angled at 90 degrees, short and light pushrods from twin camshafts mounted high on each side of the engine block.  Due to the arrangement of the valves, the engine looks like it has dual overhead camshafts, but these are parrallel valve covers.

The cutaway engine image below from the book “Great Cars of the World” by Jon Pressnell shows the typical Riley engine.

As I have posted before about the Healey cars, the Chrysler engineers tested all types of engines in the late 1940s and early 1950s and concluded that the Healey engine was the most efficient design that was on the market at that time.  In fact Healey was obtaining their 2.4 litre 4-cylinder engines from the Riley company.  As a result of this testing, Chrysler embarked on a program to build the “hemi” engines.  As a result, there is a direct link from these Riley cars and the high-performance Chrysler hemi cars. 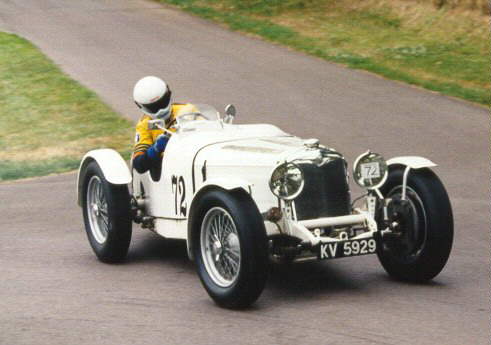 The “White Riley” During A Hillclimb

The picture below shows Canada’s Kay Petre racing the “White Riley” in a hillclimb.  Note that the “White Riley” in this picture has dual rear wheels.  This evidently was a practice that was frequently done during hillclimbs.  Kay Petre was originally from Toronto, but she moved to England and became a significant racer.  She has been inducted into the Canadian Motorsport Hall of Fame.

During a trip to Germany in 2011, I, along with some other friends, attended the Jim Clark Memorial Races at the Hockenhiem race track.  One of the cars participating in the races that day was the ERA racer shown below.

Does This Nuffield Tractor Look Like An ERA Race Car?

This post just scratches the surface of the story about Riley cars.  I am surprised that such cars are rarely mentioned in the material that I see in races of that era, but they were clearly impressive cars.  I understand that the Riley brand name is now owned by BMW.  Perhaps some day BMW will build a Riley car that would be worthy of the Riley name.

16 Responses to The “White Riley”, The ERA, And The Healey Cars