I have been looking into the “Big Healey”, the Austin-Healey, which was one of the dominant rally cars of the late 1950s and the early 1960s, along with any Saab that Erik Carlsson was driving.  As a result, I have been reading a couple of books that I have about the Healey cars.  I have several books about the Healey cars, but the two that I used to put this post together were “The Healey Story” by Donald Healey’s son Geoffrey Healey and “Healeys and Austin-Healeys” by Peter Browning and Les Needham.  Peter Browning took over the BMC Competition Department after Stuart Turner left.

Before there was an Austin-Healey, Donald Healey was manufacturing his own cars, the Healey.  I’ll come back to the earliest Healeys another time, but I’ll start for now with the Healey Silverstone.  I saw a red Healey Silverstone a couple of years ago at the Newport Concours d’Elegance. 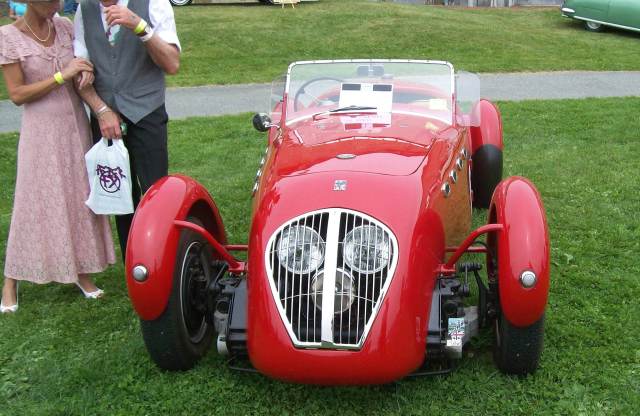 The Healey Silverstone is two-seat sports car that Healey built to be a basic car that would be suitable for racing and rallying.  It was another stepping stone to develop the Healey name as a builder of performance cars.  The Healey Silverstone was also built to a price.  The car sold for £975, which avoided the high taxes that were applied to cars at that time that sold for more than £1000.  As a result, there were no creature comforts in these cars.  The cars had minimal bodywork, cycle-type fenders, and an inboard headlight placing behind the front grille.

The Healey Silverstone Was A Basic Two-Seat Roadster

The Healey Silverstone that I saw in Newport has the number 656 on the side.  This number is typical of car numbers assigned for Mille Miglia cars.  I know that three Healey Silverstones entered the 1950 Mille Miglia.  Two of these cars crashed and the third car finished 38th Overall and 8th in class.  I don’t know if any of those cars had the competition number of 656.

The first competition outing for the Healey Silverstone was the Alpine Rally in 1949.  This resulted in a great finish for the Healey Silverstone with a 2nd place Overall finish, 1st Place British Car, and 1st in Class.  Donald Healey teamed up with Ian Appleyard for this event.  Appleyard went on to a number of great Alpine Rally finishes with Jaguars.

The Healey Silverstone used the 4-cylinder 2,443cc Riley engine that Healey had been using in their earlier 4-place coupes and convertibles.  This was the same engine that had been used by the successful ERA race cars in the late 1930s.  These engines had hemispherical combustion chambers.  In fact, the Chrysler engineers tested a number of engines in the early 1950s and found that the Healey engines were the most efficient of the engines available at that time.  As a result of that testing, Chrysler decided to use the hemispherical combustion chamber in their V8 engine designs.  Therefore the early Healey cars have a direct link to the famous Chrysler “Hemi” V8 engines.

The Healey Silverstone Was Active In Club Racing

Due to a reasonably attractive price and good performance, the Healey Silverstone cars were raced and rallied extensively during the early 1950s.  The Healey Silverstone took part in the Alpine Rally, Production Car races at Silverstone, Targa Florio, the Tourist Trophy races at Dundrod, Manx Cup Races, the Liege-Rome-Liege Rally and the Goodwood 9-Hour Race. 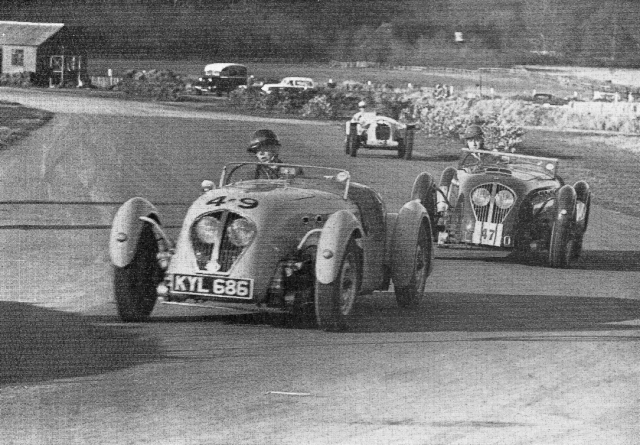 The production of the Healey Silverstone car ended in September 1950.  Healey was a small company and by September 1950 they were busy making the Nash-Healey cars which was a much larger project and they were making good money on the Nash-Healey deal.  As a result, not a large number of Healey Silverstones were built, therefore they are fairly rare.  I understand that just over 100 of these cars were built.

In the United States, renowned racer Briggs Cunningham fitted the new overhead valve Cadillac V8 engine into a Healey Silverstone.  Cunningham and Phil Waters had good results racing these cars, finishing 1st and 2nd at the Watkins Glen Sports Car Grand Prix in September 1950.  Donald Healey had wanted to do the same thing with the Healey Silverstone.  As I understand it, Donald Healey was on a ship crossing the Atlantic on a sales trip in December 1949 and to see if he could get a deal from Cadillac to supply him with their V8 engine.  While on the ship he met George Mason, who at the time was the president of Nash Kelvinator Corporation of America.  The two began to talk about cars and Nash offered to supply engines to Healey if Healey could not make a deal with Cadillac.  Mason knew that Cadillac could barely make enough of these engines for their own use, never mind supplying engines to Healey.  Mason was right and eventually Donald Healey contacted Nash about supplying engines to Healey.  This relationship soon resulted in the Nash-Healey car, but that is another story that I will expand upon at a later date.

5 Responses to The Healey Silverstone