Mercedes-Benz W196 To Be Offered For Sale

This is going to be an expensive car.  The British auction house, Bonhams, announced on Monday, March 18 that one of Mercedes-Benz’ best race cars, the W196 Grand Prix car will be offered for sale.  The auction will take place during a Bonhams auction that will be held at the Goodwood Festival of Speed on the 12th of July, 2013.

Fangio At The Wheel Of A W196 Grand Prix Car

This is the car that Juan Manuel Fangio drove to wins in the 1954 German and Swiss Grand Prix races.  Obviously, this is a very famous race car.  I took the pictures below of a W196 at the Mercedes-Benz Museum.  The W196 that is offered for sale is the only W196 that Mercedes-Benz does not own.  So the car that will be auctioned is a very unique car indeed. 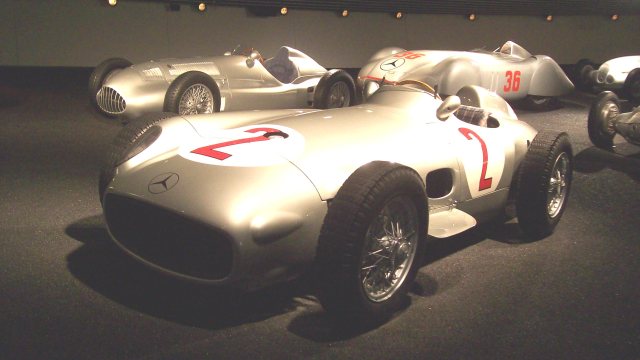 A W196 Amongst Other Silver Arrows

The car, chassis 00006, is the first open-wheeled, postwar Mercedes-Benz to win a Formula 1 Grand Prix race.  This car has a 2.5 liter engine that produced 290 horsepower at 8,500 rpm that powered the car to a top speed of 190 miles per hour. 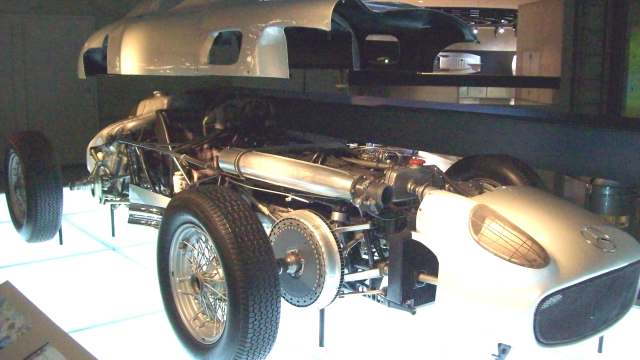 Note The Angle Of The Straight 6-Cylinder Engine

In order to reduce the wind resistance of the car, the designers laid the W196’s engine at a low angle to reduce the engine’s height.

The Blending of The Fuel Tank With The Chassis Is Interesting

On certain tracks where the speeds were going to be higher, Mercedes-Benz added a streamline body on the W196 to increase the car’s top speed.  At that time the Formula 1 rules did not prevent the use of a full body cover.  The image below shows the W196 fitted with the streamline body.

The Mercedes-Benz W196 With The Streamlined Body

I don’t doubt that this car will sell for one of the highest prices ever paid at a public auction for any car, if not the highest price.  Very few individuals will be able to afford to buy this car, so if anyone wants to buy the car and is looking for a partner willing to take a 1/2000 share, then let me know.  Ah…. the world of high finance.

2 Responses to Mercedes-Benz W196 To Be Offered For Sale