On June 24, 2012 Hal Denham & I were out measuring the official distances for our upcoming rally, the Mass Challenge Rally.   In addition, we were checking and finalizing the instructions for the rally.  We are preparing for the official check of the rally by our check volunteers.

The day started out with rain, but the whether improved as we drove the route.  We measured the route using my 2011 Subaru Outback which I fitted with an Alfa Small Systems E-Z Pulse sensor in order to provide the pulses to the Alfa Small Systems’ Alfa Pro rally odometer.

My 2011 Subaru Outback Fitted With the E-Z Pulse Sensor

Hal and I had driven the rally route several times before and had reasonable measurements for the rally, but we wanted to run the rally in one continuous run with updated distances.  The Alfa Pro rally odometer is very good for this purpose as it has a dual display odometers that can be adjusted to display the distance to three places of decimal. 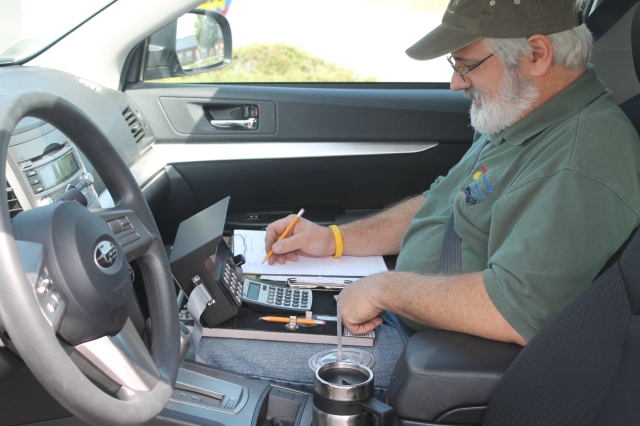 Along the route we saw some interesting sights.  At a coffee break we saw a Ford pickup truck that seemed to be making a fashion statement.

“Dirt Is The New Pink”

In addition to the Ford pickup truck, later in the morning we saw a rather rare four-wheel drive International pickup truck.

I should note that while we were collecting a great deal of information on the rally route distances, we will not likely be providing many official rally distances in the Mass Challenge Route Instruction.  The rally route instructions will be presented in many formats, but it will be possible to follow the rally route without using a special odometer or in fact, any odometer at all.  On this matter, I remember something that Fred Mapplebeck ( a New England rally expert, whose thoughts on rallying I greatly respect) said to me once: “A big part of rallying is measuring the distance.”

Hal and I saw another interesting sight near Dayville, Connecticut when we passed by a business that seems to specialize in repairing and/or restoring Lincoln Continental cars.  There was quite a collection of parts cars parked on the lot.

An Array of Lincoln Automobiles

Once Hal and I finished measuring the route, we had some food and an adult beverage at Periwinkles in Auburn, Massachusetts.  The Mass Challenge car rally will begin and end at Periwinkles.  We are pleased to announce that following the rally, while the scoring is being done, Robert Vogel will be making a presentation on this past winter’s Alcan 5000, in which he was a competitor.  This should be interesting.

The 2012 Mass Challenge car rally will be held on July 21 and will start and finish in Auburn, Massachusetts.  More information on the rally can be obtained at the website for the New England Region of the Sports Car Club of America,   www.ner.org    ,or by contacting me.

I will be presenting more information about this rally in the upcoming weeks.  I hope to see you all there!