Last weekend, March 23-25, 2012, the Chihuahua Express was held in Chihuahua, Mexico.  This is a closed road stage rally, with over 300 stage miles of racing held over some very good asphalt roads in scenic Mexico.

Typical Scene At the Chihuahua Express

I got an email message from one of the American competitors, Paul Fruchbom, who had entered his Porsche with Karen Jankowski as the co-piloto.  In Paul’s message he said the following:

“The Chihuahua race is a great event.  It is well-organized and all the people are very friendly and helpful.  It is a good tune up for the longer 7 day Carrera Panamericana, but in the 3 day Chihuahua you actually get more racing in than during the Carerra.  Each day is about 500 kilometers of which one-third are all out racing in 14-16 staged sections much like stage rallies in the US except this is on paved roads closed to traffic. Cars are all historic except they have some touring cars out that don’t race at speed.  With the violence in Mexico scaring away some competitors, the number of cars was down from last year to about 30 from about 50 last year, which is a shame because it is a truly fun event and for me more of a driving challenge than club track racing.
Unfortunately I got over exuberant and crashed the car midway on the second day and had to retire.  No injuries except a damaged ego.  My co-driver Karen Jankowski did a great job navigating and I am looking forward to the Carrera in October as we got lucky and our entry was accepted.  My car was running really great as it has always been prepared by Ray Stephens who is one of the finest race mechanics around.  My cars never DNF unless I crash them. There will be 110 cars in the Panamericana (the maximum allowed) and we will have our car ready.
If you are looking for a great time in Mexico and a chance to really test your driving skills on mountain and desert roads, try this event.  You’ll also get a chance to see some beautiful parts of Mexico rarely seen by tourists, and get mobbed by kids who want your autograph.  By the way we felt safe the entire time.”

This year I played a small role in getting Paul Fruchbom and Karen Jankowski together for the Chihuahua Express and I had hoped that they would have a better result, but it appears that they will be all set to compete in this fall’s La Carrera Panamericana. 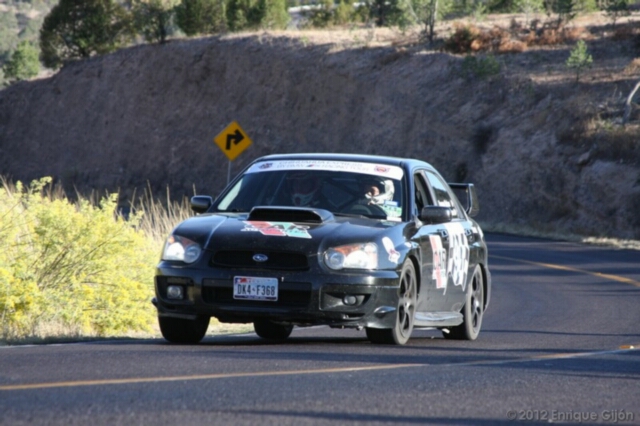 The complete results of the 2012 Chihuahua Express can be seen by clicking on the attached file:

In addition to the all-out racing classes, the Chihuahua Express also has a Touring Class where the competitors are required to maintain a specified average speed.  This class is a good way to experience all of the ambience, roads, and scenery of Mexico at a slightly slower pace, but still have a competitive motorsports experience.

I will have details of the 2013 Chihuahua Express as soon as they are announced.