In 1954 Alberto Ascari won the Mille Miglia in a Lancia D24. This win broke up a string of victories at this event by Ferrari cars going back to 1948.

Ascari Winning the 1954 Mille Miglia in a Lancia D24

In 1954, a Lancia D24 was leading the 12 Hours of Sebring race after 11 hours, but a blown engine took victory away.  Also in 1954, Piero Taruffi won the Targa Florio in a Lancia D24, which was a major victory.

Piero Taruffi in a Lancia D24

During 1954, Lancia worked on developing a larger engine for the Lancia D24.  The new engine was a 3,750cc V6 with twin overhead camshafts per cylinder block and two spark plugs per cylinder.  The engine output was about 305 horsepower.  Four Lancia D24 cars were fitted with this new engine and renamed the Lancia D25.

The Lancia D25 only had one race start and that was at the Tourist Trophy race at the Dundrod track at the end of the 1954 racing season.  I have seen confusing/conflicting results of that race, but none of them have the Lancia winning. 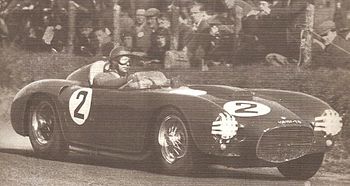 In 1955, the Lancia D25 was fitted with a new body, but it never raced again.  Lancia was now fully involved in Formula 1 racing with the Lancia D50.  Lancia had some financial difficulties in 1955 and also had the death of its main driver Alberto Ascari, as a result, Lancia withdrew from racing in 1955.  In order to stave off bankruptcy, Lancia handed over all of their Formula 1 Grand Prix cars to Ferrari.  Using those cars, Juan Manuel Fangio won the World Championship in a Ferrari-Lancia in 1956.

The two pictures below of the rebodied Lancia D25 were taken by Wouter Melissen at the Retromobile show in 2010.

The Lancia D24/D25 cars are typical of the flowing design applied to race cars of the 1950s, a style that I really like.

A Profile of the Lancia D25 from “Racing Lancias: Track, Road & Special Stages”