The Cummins Diesel Special at the 1952 Indianapolis 500

The Cummins Diesel Special at the 1952 Indianapolis 500

With the car on the transporter, its low profile can be seen

In 1952 Cummins made a very serious attempt to win the Indianapolis 500.  At that time the rules allowed diesel engines to be 6.6 litres (400 cubic inches) in size compared to 4.5 litres for normally aspirated engines and 3.0 litres for supercharged engines.  As a result, Cummins prepared a 400 cubic inch 6-cylinder turbocharged diesel engine that produced 380 horsepower.

Cummins also worked very closely with Kurtis Kraft to produce a sleek design for the Cummins Diesel Special.  To that time the engines in the race cars at Indianapolis had been in an upright position.  However with an engine that was tmuch bigger than the other cars, this would result in a very big car.  To overcome some of these size problems the motor featured an aluminum block and head with a magnesium crank case.  The engine was also lain 5 degrees off flat which provided three advantages:

The design of the Cummins Diesel Special was definitely longer and lower than the rest of the cars in the field.  But it was heavier due to the larger engine.

Cummins hired Fred Agabashian to drive the Cummins Diesel Special. After the car was tested for the first time, everyone who was involved new that they had a very fast car.  So the Cummins team became very secretive about the car.  They said nothing.

Agabashian held back for much of the month of May while at the Indianapolis 500 preparations until Pole Day by lifting off on the back straight one lap or by cruising through a turn on another lap.  He never completed a whole lap under full power so as not to draw attention to the capability of the car and risk having the rules changed.

Then at 5:45 pm on Pole Day, 15 minutes before the end of qualifying, Agabashian and the heavy, 3,100 lb, Cummins Diesel Special fitted with a fresh engine won the pole position for the Indianapolis 500 by setting an individual lap record of 139 mph and a record 4 lap average of 138 mph. This qualifying speed was over 1 mph faster than the runner up car!  During Indianapolis’ remaining qualifying days that year other cars went faster, but the Cummins Diesel was on the pole. 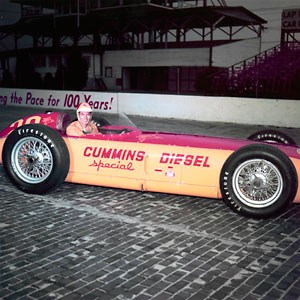 Cummins Diesel Special at the Brickyard

The race did not go well for the Cummins Diesel Special.  The turbocharger inlet was clogged with rubber (or as David Hobbs calls it – “clagg”) and other debris.  The car had to retire after 70 laps or 180 miles as the clogging became too bad.  The car is listed as finishing 27th.