This report was written by Frank Beyer for whom I was the navigator in last week’s running of the Rallye des Neiges.  Frank obviously enjoyed the rallye as much as I did:

The WINTR SERIES spilled over the border to start the “INT”(International) part of the schedule, moving southeast of Montreal, 20 or so miles from Vermont.  The drive along the St Lawrence is so flat you can probably see across Lake Ontario into southern Michigan where we ran Son of Sno*Drift.  200+ miles of flat driving, then, over a rise to the exit and you are staring at the Bromont Ski Area on the side of a mountain.  Bonjour, rallye country. 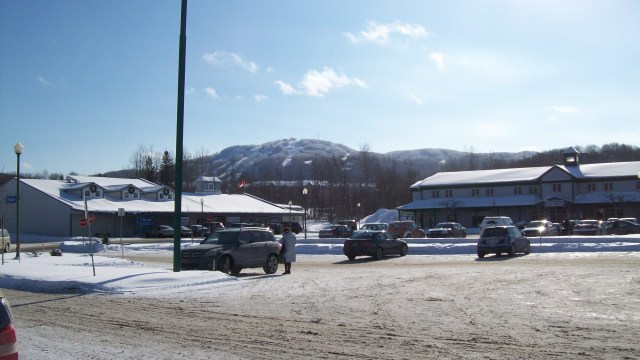 A very nice restaurant, St Hubert, served as our headquarters, and we eagerly sat through rally school (conducted in English & French).  My new favorite word may be “DRIVEX”, Canadian understatement for “simple instructions, night and/or winter, challenging driving conditions”, with scoring to the minute for most legs, no limitations on equipment, c’est la piece of cake.  Let’s go run, hope we catch Mark Everett and Marc Goldfarb on an off night, then sneak across the border with our trophy.  Heh, heh, heh!

The locals hear Drivex Rallye and spray water on the roads (for hockey practice?), flip 2 or 3” of snow on the ice for fun, then take away all of the curve signs, eh?  Then, they sit inside (it’s 2 degrees outside) and watch us go by sideways at 63 kilometers/hour (about 40 mph).  That’s entertainment!

Oh, and the timing to the minute thing?  Well, go into a checkpoint, run to the checkpoint for your time, run back to your car, and you will only be about 15 seconds down on your out time!!   You have to try to catch up on time on the road before the next checkpoint.  You can’t be early either, as you pay a severe penalty for being early.  Time allowances?  Heck, no.

And, every so often, you run a really, really tight section, that is like a stage, timed to the nearest 1/10 of a minute – that’s the tie-breaker.  Drivex, cherie!

So, sounds bad – HECK, NO!!  Most fun I’ve had on a rally(e) since my last run at John Buffum’s Winter Clambake.  Sweating behind the wheel when it’s freezing outside, straining to figure out which way the road goes (remember, no curve signs – except red-on-white arrows that translate to You’ve Gone Too Farrrrrrrrrr!), trying not to go to the bathroom, and laughing inside, what a night!!  And, to top it off, driving into a plowed over ditch on the way to the final passage control, how can it be better?

Well, as luck would have it, it did get better.  I’m sorry that I don’t know their names, but two young guys on the rally pulled us out with their truck (remember, no time allowances), and at the end we found out that there was a timing problem at the passage control and the leg was thrown.  Cazart!!!  Fourth Place was ours.

This will be hard to understand for those of us rallying on the south side of the border, but Mario and Olivier Collin won the event with a score of, take a breath, ZERO, FOR 23 LEGS.  Nothing, Nada, Nil.

Mark Everett and Marc Goldfarb scraped off the rally dust  and took second with a 1.6, Jan Pavelko and David Wood finished third with 3.8.  McKelvie and I breezed in with a 4.5, and WINTR SERIES runners Dean Campbell and Nick Narini came through with 5.5, for fifth, naturally.

Three cheers for out rallyemaster, Jeff Dungen, and his extremely competent crew of workers from the Sports Motor Car Club of Montreal.  They may be growing rallye’s future north of the border: just about everyone else at the event was under 35!  The youngest crowd we’ve rallied in for years, brimming with enthusiasm and out for adventure.  DRIVEX – what a way to go!